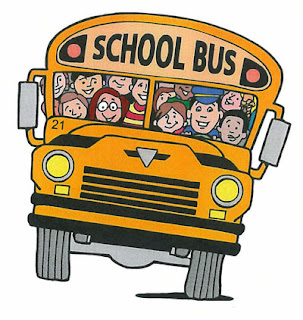 Sunday before the beginning of a new school year. Little kid and his mom, walking toward the local bus stop. Little kid's gonna start kindergarten tomorrow. Mom has to work, so she's showing him where to catch the bus.

"See?," she says. "It's easy. Just down the block, around the corner, and stop here where the curb is red, beneath this blue triangular sign."

The sign says, "Bus," in white letters on a light blue background. Little kid, of course, can't read yet; so Mom is teaching him to recognize the corner by color and shape.

"Now," she says. "There's just one thing. Two kinds of busses stop here. The city busses are blue, and new, and kindof square-shaped. You don't want those. The school busses are yellow, and old, and kindof round-shaped; and they say, 'School Bus' above the front windows." She thinks for a second. "OK. I know you can't read. I'm sure you'll recognize the school buses, but, I want you to be extra-careful. When the bus stops, and the doors open, I want you to ask the driver, 'Does this bus go to school?' Just to be sure. Got it?"

He nods. Piece of cake. Can't wait. Almost bursting with excitement. New friends! Learning! Maybe soon he'll be able to read! All that night he tosses and turns, hoping for it to be morning soon.

Morning arrives at last. Mom's already gone. He makes cereal for breakfast, dresses himself in his new school clothes. He's got new blue trousers, a new red jacket, a new red cap, and a new Batman lunchpail. His heart's beating fast, he's so excited. He locks the door behind him, trots down the block, around the corner, and stops right where Mom showed him, at the red curb beneath the blue triangular sign.

He recognizes the bus easily. Just like Mom said, it's yellow, old, and kindof round-shaped. There are letters above the front windows which he's pretty certain must spell "School Bus." But he does what Mom instructed him to do. When the bus stops, and the doors open, he looks up into the driver's eyes and excitedly asks, "Doth dis buz gowta skoooo?"

The driver slams the doors in his face and drives off, in a cloud of diesel exhaust.

Little kid is shocked, and confused. He's sure that was the right bus. Did he do something wrong? He waits, spirits sinking, while several city busses stop and leave. They're easy to recognize, just as Mom said: blue, new, kindof square-shaped. There are no more yellow, old, round busses. Around lunchtime he returns sadly home.

After work, Mom wants to know how his exciting first day went. She's saddened for him by his story. He's so disappointed. And she's puzzled: it all sounds right. Right corner, right blue triangular sign, right yellow, old, roundish bus which probably said "School Bus" above the front windows. She thinks, and explains, "There must have been some first-day mix-up. Some bureaucratic thing. New drivers, maybe. 'Cause I'm sure everything you did was right." She shrugs, and hugs him. "I'm sure everything will be fine for you tomorrow."

Little kid again has trouble sleeping, but this time it's as much from apprehension as excitement. He wants to go, but, he's not sure what went wrong. In the morning he fixes cereal, dresses himself in his blue trousers, red jacket, red cap, and Batman lunchpail, locks the door behind him. Trots down the block, around the corner, stops in the same place, at the red curb beneath the blue triangular sign.

The same bus as yesterday arrives. It's yellow, old, and kindof round-shaped. There are letters above the front windows which likely spell "School Bus." With his heart pounding from anxiety, this time, he again does what Mom instructed him to do. The bus stops, the doors open, he looks into the driver's eyes and asks, "Doth dis buz gowta skoooo?"

The driver slams the doors in his face a second time, and drives off, in a cloud of diesel exhaust.

She's puzzled, and alarmed, and more than a little angry at the driver. Everything little kid says sounds exactly right.

"But here's the deal," she tells him. "This is a joke, and, in jokes, things have to happen three times before you arrive at the punchline. So, I want you to do everything the same way tomorrow. If that fails, I'll take Thursday off work and come with you."

This joke is not that funny, he thinks. Not when you have to live inside it. He sleeps badly, this time from fear. In the morning, fixes cereal, dresses in his new clothes, takes his Batman lunchpail, locks the door. Down the block, around the corner, here comes the yellow, old, round-shaped bus. "Doth dis buz gowta skoooo?" The driver slams the doors in his face. Cloud of diesel exhaust.

"Alright, that's enough," Mom says in the evening when she arrives home from work. "This joke isn't funny anymore. I'm going with you and we're having a talk with that driver."

Neither of them sleep well. Breakfast, clothes, lunchpail. This time they both walk down the block, and around the corner, to the red curb beneath the blue triangular sign.

"This is where you've been going?," Mom asks. Little kid nods.

"Well -- this is right," she says. "This is the place. I can read. The sign says, 'Bus'." She points up the street to the yellow, old, round-shaped bus now arriving.

"Is that the bus that's been coming here?," she asks. Little kid nods.

"Well -- this really is right," she says. "I can read, and those letters above the front windows clearly spell 'School Bus'."

"Now listen you," she berates the driver. "My son's been here three mornings in a row, and three times you've refused to let him on your bus. He's been traumatized, he's going to have to start the school year late. And I can read: I know this is the right bus. Why aren't you letting him on?"

Moral of Story : Mom's and Dad's, please spend your time to be with your kids in the first day of their journey begin.

Alunan Jari Jemari Skullsplitter at 6:54 AM No comments:

It's been a while. Someone I know, left me for good. And now seem like he/she totally different. He/she show it in his/her writing. And most of his/her writing it's about me eventhough no names inside that but I know, it's me.

Is it wrong if I just keep reading his/her writing? I never comment on his/her writing. I just read like I do before. Is it consider stalking his/her? Erm, I don't know, maybe I should stop if he/she wants that. It's my pleasure to do that.

Sometimes, I don't really understand with human being. Should we keep hating each other because of past? Is it worth it? Like Dixie Chicks said in their song, 'Forgive sounds good, but forget I'm not really could'. At least we can forgive anyone we know eventhough we can forget whatever happen in past.

I don't know with all of you, but me, I forgive everyone. You, you and you. All of you. Thanks for being part of my life. :)

Salam
skullsplitter
Alunan Jari Jemari Skullsplitter at 6:36 AM No comments:

Thanks for being very supportive, being a good friend eventhough it's just in a short time. I'll remember that and appreciate it.

Thanks to for your ears to hearing everything, to care about it.

Allah, please help me on this. Thanks.

I'm not choosing this way to evade everyone in my life.
Trust me mom. I'm choosing this for me to have my own life.
To make you happy one day. To enjoy anything left for me.
Don't be too worried, I need all of you.

Thanks for being a very lovely mom to me. You're my everything.
Nothing can change it. From my first breath till now, you're my everything.
It'll make me happy if you'll understand whatever I do it's not just for myself.
It's for everyone mom. For you, Abah, my lovely sister and brothers.

Trust me mom. You'll understand one day.
I just want to say, I love you so much mom.

I don't know u remember or not, in every year, 13 Nov it's a day for me to show my love to you and I did it for the past 5 years and I know you didn't realize that. So, this year I try to make something different for you, I'm writing and this post it's just for you mom.

I LOVE YOU SO MUCH MOM!

Is it the right way?

I never trusted on myself. I always hurting people around me.
I try to be good to everyone. I try to be fair. I try to fill something in my life.
I've tried everything.

But finally, I lost whatever I want, I'm hurting myself and I'll never forgive myself when I'm hurting others too. Yeah, I always did it. Now I just feel like someone will mad at me.
Someone will hurt, will feel guilty and confuse.

Should I stop with what am I doing right now? It's not fair to her/him.

For you : I'm so sorry. Maybe I just come to ruin your life. I just felt that.


Salam,
skullsplitter
Alunan Jari Jemari Skullsplitter at 11:14 AM No comments:

Being Nice, Is it Enough?

I wonder if there got someone can teach me to be nice coz maybe I got less respect to others. In so many way. This is only what in my mind. Is it enough or not? Yes, I asked you. Thanks.

1. When we do something bad or wrong to others, we should say sorry.

2. When they do something great to us, we should say thanks.

3. If we see he's doing something not good, we give him/her an advice

4. Be a good friend in easy or hard time.

5. Every single minute, wiling to forgive.

6. When we meet someone we like, tell her/him the truth about our feel.

7. When we want to say something, think it first if there any possibility it will hurt others.

8. Keep listening to your friend's advice and do what it right.

9. Being fair to everybody.

Had a conversation with a few friends last night and we talked about being nice, honest and someone new with our group be a victim-lady-cum-motivator to asked how's good being nice and honest to her. And she's simply come with the answer :

Ej:
"I love someone who used his good attitude without showing it, coz for me someone who used it in that way is someone who was trained to be like that. And he's trained by himself. The conclusion is he's not being honest to himself and how can he be honest to others. And I don't like someone come to me and said that he like me, I preferred someone who can use others to get close with me and slowly make me fall in love with me. lol."

Me: Erkk.. good thought you have but I just confused, did i said something about LOVE or I just missed something with what u said?

Ej: Haha. You got every single words i've said and the last part of my words it's just an addtional. Just in case. lol. Hahaha.