The Festival of Sacrifice In Islam 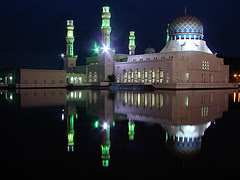 Eid Al Adha. This is the word. A religious festival celebrated by Muslims and Druze worldwide in commemoration of the willingness of Prophet Ibrahim AS to sacrifice his son as an act of obedience to God which follows the annual Islamic pilgrimage (Hajj).

This festival remind me about the sacrifice in our life. During the celebration of Eid Al Adha, Muslims commemorate and remember Ibrahim's trials, by themselves slaughtering an animal such as a sheep, camel, or goat. This action is very often misunderstood by those outside the faith.

Allah has given us power over animals and allowed us to eat meat, but only if we pronounce His name at the solemn act of taking life. Muslims slaughter animals in the same way throughout the year. By saying the name of Allah at the time of slaughter, we are reminded that life is sacred. The meat from the sacrifice of Eid al-Adha is mostly given away to others. One-third is eaten by immediate family and relatives, one-third is given away to friends, and one-third is donated to the poor.

The act symbolizes our willingness to give up things that are of benefit to us or close to our hearts, in order to follow Allah's commands. It also symbolizes our willingness to give up some of our own bounties, in order to strengthen ties of friendship and help those who are in need. We recognize that all blessings come from Allah, and we should open our hearts and share with others.

We pray to Allah SWT on this great day of Eid Al Adha to grant us with tawfeeq to follow in the path of Prophet Ibrahim AS and forgive all our past and future sins and hope that all our Haji's in Mekah in good Health and reached back home safely, also may Allah SWT protect all and every one should do all the IBADAH during the haj and every day prayers. Amin.

Happy Eid Al-Adha to all muslim friends out there! - From me, Skullsplitter / Eddy / Mohd Zuraidi Ahmad Daud